Brendan Taaffe and Kelsey Wells in Concert at the Old Firehouse – fiddles, ballads and crankies – 7:30

These two fine musicians—one from Vermont and one from Tennessee—have recently come together to create a program celebrating the music of the Upper South. Fiddle tunes and ballads from Kentucky and Tennesse as well as Brendan’s reimagining of these ballads, combining them with Zimbabwean mbira to create something new.  They’ll also have some crankies in tow. Scrolling illustrations in a wooden puppet theater that accompany songs (think of MTV, but in 1843), crankies are a magical antidote to the digital age.

Brendan plays guitar, fiddle, banjo, and mbira and has performed with Magic Foot, The Waxwing Four, The Bright Wings Chorus, and Northern Harmony. This year, he is a research fellow at the Appalachian Sound Archives at Berea College, so expect some rare gems from the Kentucky tradition.

A contest winning fiddler from Nashville (where the bar is high), Kelsey plays fiddle, banjo, and mbira and is best known as half of the popular contra dance band, Turnip the Beet. In 2013, Kelsey traveled to elementary schools in Norway and Denmark to share and perform old-time songs and dances. She was the 2013 U.S. delegate to the world folk music project Ethno Denmark and has worked extensively with the Folk School of Chattanooga and the Musical Heritage Center in Pegram, Tenn. 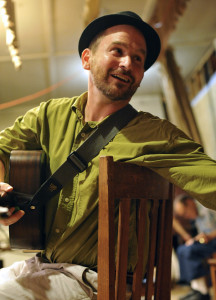